The Inability to Create: Donatoni and Cage

Excerpt from my doctoral research paper.

FRANCO DONATONI was born in Verona on June 9, 1927. At that time, Benito Mussolini’s National Fascist Party ruled the Kingdom of Italy, following the March of Rome.[1] Donatoni grew up during the Italian irredentism, when the national goal was to promote the unification of geographic areas still retained by the Austrian Empire after the War of Independence in 1866.[2]While Europe was emerging from the ashes of World War II, rediscovering Schoenberg’s second string quartet and becoming accustomed to its place under the new nuclear forces — Russia, the United States, England and France — Donatoni was in Rome, studying composition with Ildebrando Pizzetti at the Accademia Nazionale di Santa Cecilia, from which he graduated in 1953.[3] The Marshall Plan’s European Recovery Program lifted Europe from 1948 to 1952 under Harry S. Truman, sending a shockwave of reconstruction through England, France and West Germany,[4] which greatly benefited Italy because the United States feared that the country could become communist following the vote to abolish the monarchy and create the Republic.[5]Meanwhile, the transistor, invented by Bell Laboratories in 1947 and industrialized by Raytheon in the 1950s,[6] contributed to the development of the “manufacturers of culture” who would delimit music’s “market allocation,”[7] segmenting music into spheres such as “classical” and “popular.” Yet Donatoni, like other composers with him and after him, wanted to escape from a strictly commercial conception of music and take into his hands the fate of a necessary “new music.”Franco Donatoni wrote music based in particular on Darmstadt’s International New Music Summer Courses, founded by Wolfgang Steinecke in 1947,[8] which he attended in 1954, 56, 58 and 61.[9] During these years, he was exposed to Pierre Boulez’s uncompromising ideas on modernism; Darmstadt taught modern music following Schoenberg’s ideas of 1908, along with Webern and Varèse.

As war acts on politics in that it has the capacity to reconfigure social relations, the start of the identification processes of those engaged in armed conflicts through creation or mobilization of musical works and musical practices, the sublimation of suffering prompted by conflicts, Christian von Ehrenfels’ “Gestalt psychology,”[10] and the technological advancement of communication are all key to understanding the reasons behind the necessity for a new music following World War II, with Nazism being the consequence of the “untenable metaphysical philosophies and ideologies upon which Romanticism was founded.”[11]

Besides Franz Liszt’s Bagatelle sans tonalité, written in 1885,[12] and Abel Decaux’s Scriabinian Clairs de lune, written between 1900 and 1903,[13] a diachronic enigma is Arnold Schoenberg’s fourth movement of the second string quartet, Op. 10, “Entrückung,”[14] and Drei Klavierstücke, Op. 11,[15] both written in 1908, as to why a subjective exhaustion of the expressive tonal chromaticism — since aesthetic evidence seems to point in that direction — would lead to a harmonic relativism identifiable as “atonalism.”[16] Are Schoenberg’s complaint that “the illegitimacy of a triad chord that claims dominance over all the others”[17] and these two 1908 works a natural reaction to the exhaustion of chromatic harmony, as Webern later pointed out,[18] or perhaps a revolt against Karl Marx’s 1848 Communist Manifesto?[19] The Kishinev pogroms between 1903 and 1906?[20] The San Francisco earthquake of April 1906?[21] Mathilde Schoenberg’s affair with Richard Gerstl in 1908 (most probably)?[22]

“The dictum that every composer must create an individual style to establish credentials as Artist is so widely taken for granted in the modern world that it is worth emphasizing how recently the Western community has demanded this kind of originality.” [23]

Friedrich Nietzsche’s criticism of modernism established a striking parallel between the shift to atonalism and the Dionysian experience of looking into the abyss:

“Who gave us the sponge to wipe away the horizon? What were we doing when we unchained this earth from its sun?” [24]

What Schoenberg did was the first radical experience of atonal music in history. It overwhelmed the listening parameters and redesigned the tonal music geometries. For the first time ever, a composer could be the supreme author of his own structural grammar, “making up the rules as we go.”[25] 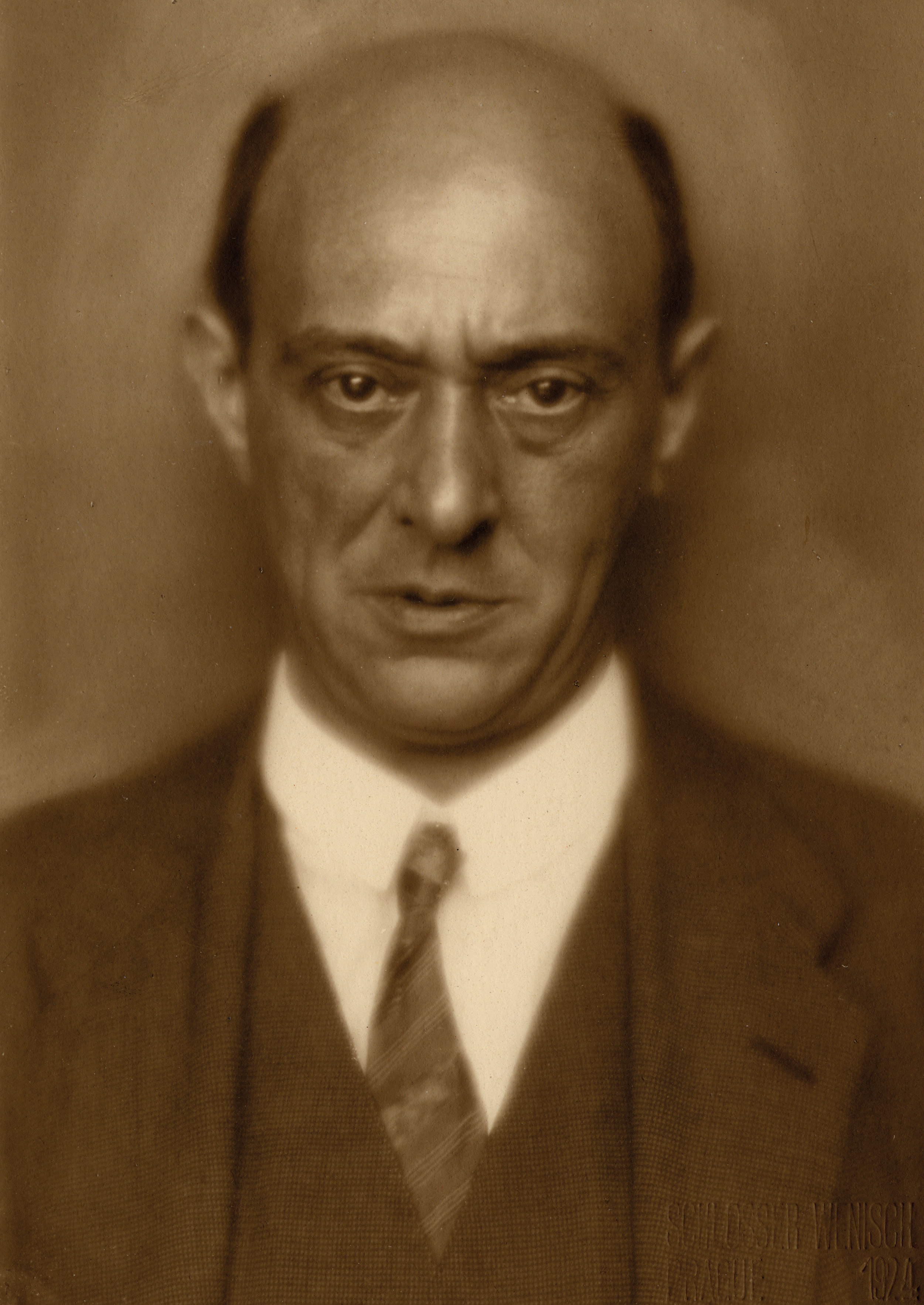 But why did this first radical experience take place to begin with? Why such a compositional methodology, replacing tonality with a new system of his own making? Because of the need for a logical analysis of language following the growing globalization of communications, new socio-economic developments and the unification of science going beyond metaphysics, in which statements would remain clearer, universal and more accessible. Because Schoenberg asserted that:

“The logic of the artwork embodies and expresses its own value, defining a structural listening as a concrete attempt of unfolding logic which could vouch for the value of the music itself.” [26]

“The appreciation of art is accessible only to those whose artistic and ethical culture is on a high level.”[27] Schoenberg’s apparent confusion regarding musical expression allowed him to convey atonal musical ideas which were able to embrace atonalism, in that a “germinal conception of a musical work is indescribable in language.”[28] He conceived music as a form of “logic” that is subject to constraints imposed by the laws of sound (“the requirements of the material”), and the laws of cognition (“the demands of the subject”).[29]

It was Gottlob Frege (1848–1925) in his Begriffsschrift of 1879,[30] who may have triggered Schoenberg’s experience of atonal music, along with the early writings of Ludwig Wittgenstein (1889–1951).[31] His symbolic conception of logic replaced Aristotelian syllogistics, rewritten in symbolic form, in order to algebraize the syllogistic logic.[32] In Platonic realism, a structure exists with its properties independent of any systems that have that structure. In Aristotelian realism, a structure exists and is ontologically posterior to the system that instantiates it. Frege’s intentions were an axiomatized logic “purified” from clericalism and empiricism, which would redefine the complex relationships between the signified and the signifier. To that end, he adopted a functional-theoretical syntax and conceived logic as a language.

Schoenberg may not have read Frege’s Begriffsschrift, but he felt its strong influence in the Wiener Kreis, the “Vienna Circle,” led by Moritz Schlick[33] at the University of Vienna’s Mathematical Seminar, which he frequented.[34] In the meantime, Wittgenstein’s Tractatus came with the possibility of a theoretically “principled distinction” of an intelligible discourse compared to a nonsensical one, the “verifiability principle,”[35] placing the analysis of language at the center of philosophy, calling for the rise of what would become the Logical Positivism movement.[36]

“To understand a proposition is to know the outcome when it is true (it can therefore be understood without knowing if it is true).” [37]

This neo-Kantian proposition, which constitutes a critique of language, was a key factor for Schoenberg regarding the relationship in formalism between theoretical music and mathematical modeling in music analysis. Schoenberg was looking for an epistemological shift from the triad chord dominance with the help of a new “universal” (stable immutable law) in his quest for harmonic relativism. Schoenberg would then rebuke Hugo Riemann’s Grundlageforschung (“foundational research”) hierarchy of the sonance as a universal[38] and replace it with new standards such as the “emancipation of the dissonance,” the equal status for consonance and dissonance, and the liberation of the dissonance from obligatory resolution to consonance, going back all the way to Protagorus of Abdera’s sophistic revolt against absolute standards.[39]

Wittgenstein imagined a conceptual framework that reduces language to its formal logical essentials, a prescription of the proper usage of language in order to circumscribe the limits within which things can, and cannot, be legitimately described and “said,” despite Kantian Proposition 6.421:

“It is clear that ethics cannot be expressed. Ethics is transcendental. (Ethics and aesthetics are one.)” [40]

He proclaimed the aesthetic limits of discourse with all ethics and aesthetics pointing to the facts, drawing attention to things. Facts, for Schoenberg, were the liberation of dissonance from obligatory resolution to consonance, the chord complementarity where the second chord “receives” what is missing in the first, and the sovereignty of the series which provides for harmonic coherence. Words now name things from the world of experience, and the relationships between them are organized in a propositional grammar,[41] an “entelechy” — a being in itself, having its own end and perfection, “rhythm and harmonies created by visual forms and colors.”[42]

Equating Schoenberg’s writing technique to the logical tools of positivism[43] seems to make sense as the “elementary propositions” of a row, in a serial standpoint, like the “protocol sentences” of an inevitable axiomatic proposition, are an empiricism that seeks to reconstruct science (tonality), considering a single pitch as an irreducible unit of sensory data. It is precisely a “Machian empiricism,”[44] if such an adjectivization is possible, reconstructing music and its philosophy inside a system of logically inevitable propositions (the “protocol sentences” of what would become serialism). When Schoenberg joined the Wiener Kreis in 1922, the last adjustments of his dodecaphonic enterprise were already well advanced. He would reposition the coding of the musical expression, where the structured pitches would obey the laws of a series, where the Grundgestalt (“basic shape”) would become a twelve-tone row inside “developing variations.”[45] The question of language-directionality and gestural-signifier[46] would compose the grammar of the meaning, a syntax of the foundation of the sound expression.

A later comparison between Schoenberg and Friedrich Nietzsche’s Übermensch (will to power) is found in Thomas Mann’s Doctor Faustus when the demon-possessed character Adrian Leverkühn, based on Nietzsche, attains fame for inventing twelve-tone music.[48] This diabolical comparison by such an acclaimed author constitutes a social refusal of the radical musical agenda of this new norm. The capacity to hear and tolerate an environment of sounds that did not exist before WWI was inconceivable, as if physical death itself had found a way into music because music was now confronted with a present that was no longer recognizable, a present in a nuclear world in which the scream of expressionism had fossilized in Auschwitz.

“… it may have been wrong to say that after Auschwitz you could no longer write poems. But it is not wrong to raise the less cultural question whether after Auschwitz you can go on living — especially whether one who escaped by accident, one who by rights should have been killed, may go on living. His mere survival calls for the coldness, the basic principle of bourgeois subjectivity, without which there could have been no Auschwitz; this is the drastic guilt of him who was spared. By way of atonement he will be plagued by dreams such as that he is no longer living at all, that he was sent to the ovens in 1944 and his whole existence since has been imaginary, an emanation of the insane wish of a man killed twenty years earlier.”[49]

Following the death of Richard Strauss in 1949, it is impossible to write music — music that is considered “serious” — without taking into consideration six new realities:

Franco Donatoni brilliantly competed with, overcame and answered the first five — yet the most difficult reality was himself.

Essay – Difficult and dense tale, quite short (101 well-thought-out pages), fideistic, the first of a series. The plot of the backstory is the attacks on the towers in New York that are followed by the upheaval of a symptomatic friendship.

WHEN THE DESTRUCTION of the Twin Towers had struck dumb a global society as malleable as an emotional opinion, the character at the center of this strange tale took refuge in himself, faced with the relentless reality of collective ignorance.

The moment was certainly eloquent, a moment stemming from a prophetic staging in broad daylight for a better disaster. The buildings, in rows like barrels, had displayed a war pensioner’s outdated reverence, receiving the planes painted with distemper like a morality lesson following a day of debauchery with all the enviable silence that basic vigilance would have forestalled. The Third World War had officially begun: America had been kidnapped; its riches now had to satiate Lucifer’s soiled hands in his rape of the dignity of nations and common souls.